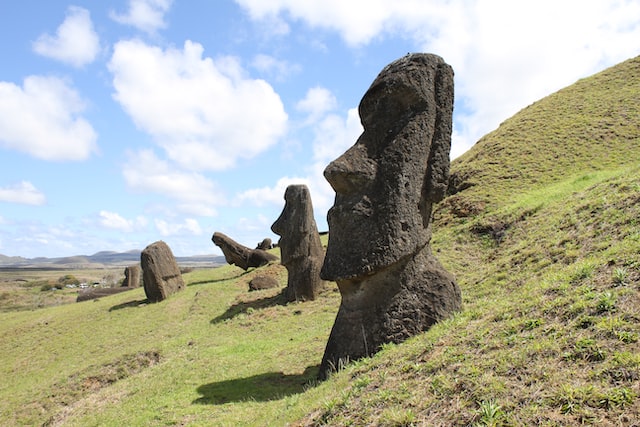 The imposing stone heads and other artifacts from Easter Island have been burned.

In addition to destroying more than 100 hectares of the island, the fire, which was brought on by the adjacent Rano Raraku volcano, also damaged the iconic Moai sculptures, which were made by a Polynesian tribe more than 500 years ago.

Ariki Tepano, the director of the Ma’u Henua community, an indigenous group that oversees the Rapa Nui Natural Park, referred to the destruction as “irreparable,” and he cautioned that the “consequences transcend beyond what the eyes can perceive.”

A protected region showcasing the history of the Rapa Nui civilization is known as the Rapa Nui National Park, which takes its name from the Indigenous term for the island.

It is the most distant inhabited island in the world and is classified as a UNESCO World Heritage Site. The island is located about 3,500 kilometers (2,174 miles) off the coast of Chile. Because of the enormous Moai sculptures, the remote island has long been on the bucket lists of tourists from all over the world.

Exposure to high temperatures may hurt the composition of the statues by causing large cracks that compromise the Moai’s integrity.

The Rapa Nui council acknowledged the closure of the island’s national park, which has 386 Moai made of solid basalt, in a Facebook post. Conservationists are presently investigating the magnitude of the losses.

Before the travel ban caused by the coronavirus outbreak, Easter Island was dealing with a string of unruly tourists who would occasionally pose for pictures next to the Maoi in such a way as to appear to be “picking the noses” of the enormous sculptures.

A man from a Chilean island was detained two years ago when his truck slammed into one of the stone statues and destroyed the ahu or platform, it was resting on.

About 900 years ago, Polynesian mariners made their way to Rapa Nui, which has long piqued the interest of experts who are trying to figure out why the enormous sculptures were erected in their current location.

Where the island’s inhabitants discovered freshwater springs may be related to the sculptures.

The Polynesian society settled on the island and created a “powerful, imaginative and original tradition of monumental sculpture and architecture, free from any external influence,” including the “erected enormous stone figures known as Moai, which created an unrivaled landscape that continues to fascinate people throughout the world.”