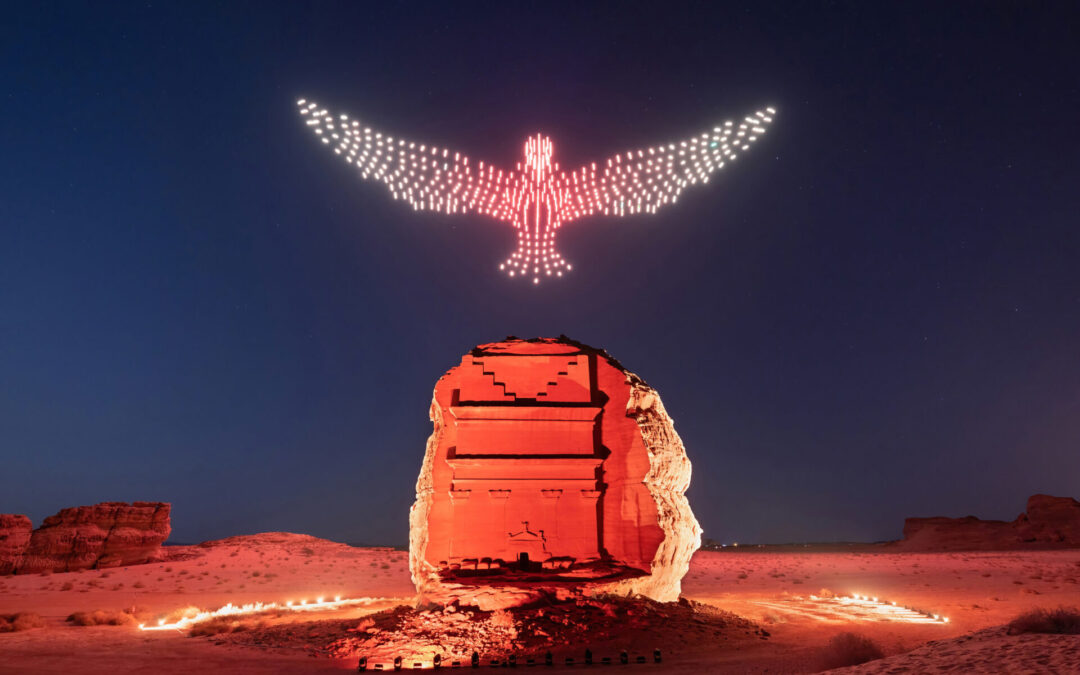 Hegra’s Drone Light Show featured an outstanding drone-created light drawing that gave the appearance of light. The performance was held at AlUla, in the northwest of Saudi Arabia, on October 13, 14, and 15 of 2022 to commemorate the conclusion of the AlUla Wellness Festival, the first of a number of gatherings and celebrations that make up the AlUla Moments Calendar. The producers of Hegra’s Drone Show are Balich Wonder Studio KSA and AlUla Moments, with funding from AlUla Moments.

An illustration of a falcon in flight over the Lyhian Son of Kuza Tomb at Hegra, the first Saudi Arabian site to be included on the UNESCO World Heritage List. Hegra’s Drone Light Show is a performative artwork at the nexus of technology in which luminous drones will fly in the pitch-black sky of AlUla to construct a flying sculpture accompanied by music, exploring the origins and beauty of light in its purest form. AlUla Moments and SKYMAGIC are the sponsors of Hegra’s Drone Show, which was created by Balich Wonder Studio KSA and made possible by AlUla Moments.

In the northwest of the Kingdom of Saudi Arabia, near Hegra, a celebration of light is beginning. In Hegra’s Drone Light Show, the origins and allure of light are examined.

The foundation of wellness, light powers both the mind and the body. The AlUla Wellness Festival, the first of a number of festivals and events that make up the AlUla Moments Calendar, comes to a conclusion with the light display. AlUla Moments, in collaboration with SKYMAGIC and Balich Wonder Studio KSA, presents Hegra’s, Drone Show.