The Yosemite Firefall in 2023: how to view it 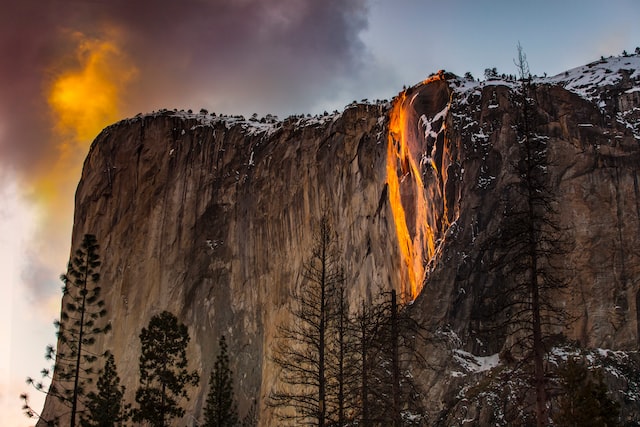 The magnificent Yosemite Firefall phenomena have recently taken over social media, but if you want to witness it in person in 2023, you’ll need to be aware of the capacity limitations.

Yosemite National Park witnesses a stunning and unexpected sight every year from mid- to late February when the sun sets. Horsetail Falls, which runs in the winter over El Capitan’s eastern side in the valley, may be seen lighted up in magnificent flaming orange and red colors, seeming as though the lava is streaming down the rock face. The Yosemite Firefall is the name of the occurrence, and whenever people travel there to watch it, they are constantly captivated.

But because of the event’s popularity, there will be limits in place every day from noon to 7 p.m. for those hoping to witness it this year. The National Park Service (NPS) estimates that the dates for 2023 will be between February 10 and February 28; however, you should check back closer to the event because it is subject to unforeseen weather conditions.

When the waterfall is flowing on clear nights with no clouds in the sky, the water is backlit by the sunset in February when it is in the right position, creating a stunning lighting display. On rare occasions, above haze or clouds can assist produce some interesting light play, even though they can neutralize the impact. Horsetail Falls must have enough water to fall over the brink, which requires that the ground snow melt from the sun.

Between five and fifteen minutes before sunset, the moment occurs. People flock from all across the nation to get a good place starting early in the day since it is so well-liked. People interested in witnessing it are advised to go there in the late morning or early afternoon.

Where exactly is the Firefall? Getting there

Yosemite Falls parking and the viewing area are separated by a pedestrian walkway, therefore one lane of Northside Drive will be off-limits to cars. It is not permitted to park or stop to offload people on Northside Drive in the neighborhood.

Warm clothing, a headlamp, or a torch are also suggested for visitors to carry.

The interest in this event has greatly increased recently, despite it previously being relatively unknown. The region had experienced litter and filthy conditions as a result of a lack of amenities and increased visitor traffic, thus additional limits were introduced. The picnic area will this year have restrooms and trash cans.

Yosemite National Park has long been well-liked, but as more people seek out outdoor adventures, it is one of several national parks introducing registration systems. Yosemite Valley’s North Pines Campground, a popular location with views of Half Dome towering above it, was subject to a lottery for early reservation access to control summer crowds.