8 of the UK’s most scenic train journeys 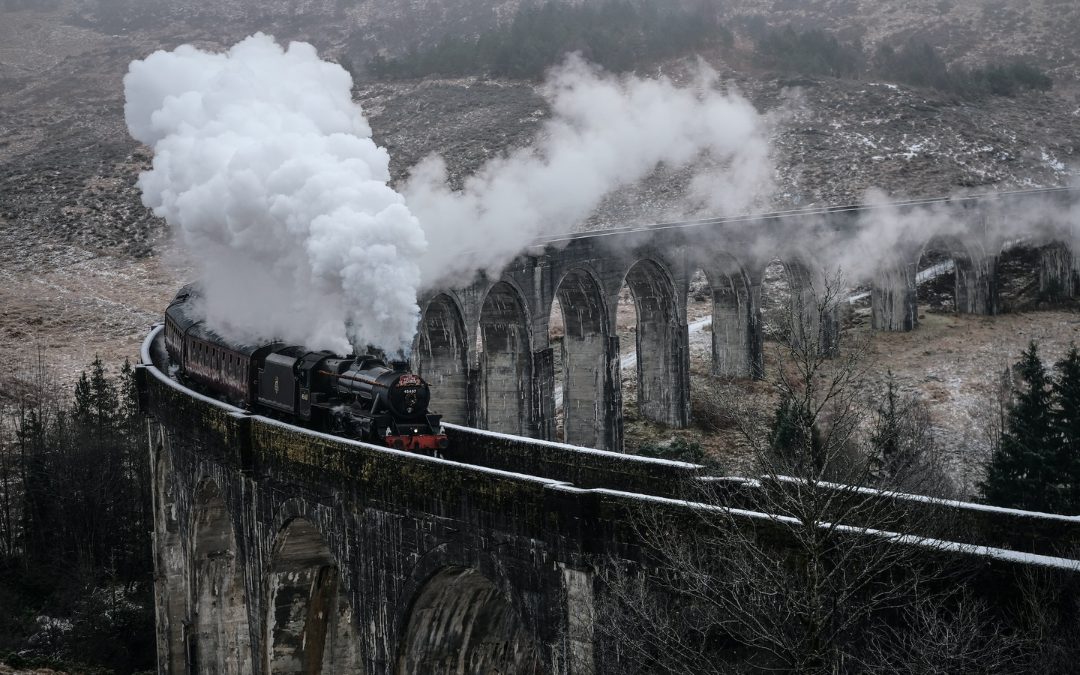 These British trains provide stunning vistas as they go through the countryside and quaint beach resorts.

There is something incredibly romantic about train travel, from daring cross-country trips to opulent rides in the world’s most romantic locations.

In addition to stressing the benefits of leisurely travel and, of course, showing breathtaking scenery along the way, it transports passengers to a simpler era.

Fortunately, there are thrilling train journeys available all over the globe, including in the United Kingdom, which is home to some of the greatest, biggest, and most picturesque trains.

So, if you’re looking for a wonderful vacation with beautiful views of the countryside, seaside towns, and cities, consider taking one of these incredible train rides in the U.K.

Belmond’s British Pullman transports travelers back to the Roaring ’20s in its famous art deco carriages, making it may be the most opulent way to tour England’s picturesque countryside.

The ancient Chatsworth House, Highclere Castle, and Le Manoir aux Quat’Saisons are all reachable by a round-trip day journey by rail from London Victoria. Seasonal veggies, meats, and decadent desserts are all included in the mouthwatering menu.

For those who appreciate design, the Wes Anderson carriage combines art nouveau design, symmetrical lines, and pastel and jewel tones.

Coleraine to Londonderry may be reached in 40 minutes, which is ideal if you’re on a tight schedule. The train, a common commuter route, travels through some of Northern Ireland’s most picturesque locations and was previously hailed by train enthusiast Michael Palin as “one of the most magnificent rail excursions in the world.”

Nature’s painting is filled with exquisite fields and the deep blue sea on one side, and green mountains and the raging River Bann on the other.

There are several tunnels, as well as historic houses, churches, and beach villages. For its charming village and, provided it isn’t too windy, a picnic on the beach, Castlerock is well worth a visit. The Mountsandel Fort, Ireland’s oldest human habitation, is located in Coleraine.

However, despite the town’s rich history, we advise taking a bus to the Causeway Coast, a UNESCO World Heritage site with attractions including the Giant’s Causeway and the Carrick-a-Rede rope bridge.

Welcome aboard Scotland’s opulent sleeper train. With only 24 seats available, the atmosphere on board is cozy and opulent.

Standout features include en-suite accommodations, delicious meals, spa services from some of the sexiest independent businesses in the U.K., and an observation car with a balcony.

The Kyle of Lochalsh and the lovely Cairngorms National Park, which was a favorite of Queen Elizabeth II, are just a few of the sights that travelers will experience.

As you wind through Fort William and pass breathtaking views of Ben Nevis and the shoreline of Arisaig, it becomes impossible to stop daydreaming until afternoon tea service begins.

Besides the opulent comforts, there are many options for adventure, such as exploring the gorges of Aviemore, taking windy walks on the Isle of Bute, paddling on the renowned Loch Ness, and clay pigeon shooting at the Rothiemurchus estate.

It is not surprising that this now-iconic Scottish train is a hit on Instagram because the journey from Fort William to Mallaig features an unreal medley of magnificent U.K. landscapes.

Depending on the season, what you see changes. Expect lush green meadows and the most brilliant sunsets in the summer, and icicle-studded huge trees and frozen rivers in the winter.

Book your seat in advance since they often sell out quickly.

The Settle-Carlisle Railway travels over 73 miles of gorgeous terrain, passing past many undiscovered Brits areas that are ruggedly lovely and lonely.

The Yorkshire Dales National Park, which is home to scented heather, wildflowers, dry stone walls, and undulating hills, provides the highlights. The surrounding lush fields are filled with sheep, and the stations are as lovely.

Added justification to board the train? One of England’s final big Victorian routes, this began service in 1876.

Even though it only lasts for ten minutes, this one is worthwhile and you can use it as many times as you like to make a whole day out of it by riding back and forth.

The Cornish coast is a treasure trove of coves, turquoise seas, white-sand beaches, and lovely coastal villages that were previously cherished by people like author Virginia Woolf, the occasional celebrity, and more.

This section of track, which was opened in 1877, whizzes down the picturesque Cornish coast. Sit on the right side of the train for the greatest views, which will allow you to catch a peek at the hazy dunes that will ultimately meld into the sparkling seas.

This Victorian narrow-gauge railway is still worthwhile to ride, if only for the pleasant vistas, even if it serves primarily as a tourist attraction and a requirement for hikers who need a little assistance climbing the stunning Snowdon peak.

Every 30 minutes, the train leaves the station in Llanberis, and it takes about an hour to go to the summit.

Have your cameras ready to snap the towering Ceunant Mawr waterfall, which cascades more than 100 feet into a vast canyon, as well as historic farmhouses, medieval walls, the occasional goat, and other sights along the route.

The train only goes as far as Clogwyn at the moment since a portion of the route is sealed off due to its age. You may get off there and continue walking to Hafod Eryri to enjoy the expansive views. It’s possible to see the coast of Ireland on a clear day if you’re lucky.

It may surprise you to learn that this is one of just two sleeper train services operating in the United Kingdom today, running between London and Edinburgh over the picturesque Lowlander and Highlander lines that wind across Scotland.

However, this ride is not like others. As a result of a 2019 renovation, this train now resembles a hotel on wheels.

Cabins have cozy double beds, opulent en-suite bathrooms, and dimmable lighting for an added touch of mood. During the eight-hour, 500-mile trip, food is provided by a rather upscale dining cart.

Add Scottish specialties like haggis and tatties (potatoes) served with a whiskey cream sauce to the usual contenders for your meal. As the sun rises over the Northumbria countryside, it’s also worthwhile to get up early.